“Good intentions are no substitute for good deeds” read a big banner in the south stand. But that one was not about a football at all, strictly speaking.
The banner refers to a dispute between a section of traditionally minded supporters who call themselves Social Romantics and the self-styled alternative club. “A couple of days before Christmas, the romantics published a petition – “It’s enough” – that demanded limits to commercial activities in and around the partially rebuilt stadium and a return to “our values and our understanding of football and its experience of it”.
It added: “Our St Pauli, an island in the world that’s only concerned with the financial exploitation of each and everyone” and referred to “our otherness in the market place that is professional football”. The Jolly Rouge, a skull and bones on red background, is their coat of arms. Around 4,500 fans have already signed the petition.
The SRs are not naive. They accept that the club need to refinance to pay for the new main stand, and to ensure the squad is good enough to stay up. “You can’t make €50m for the new stand and €40m for the playing staff with two chippies,” said the St Pauli president Sfefan Orth. He has promised that the Millerntor will never be “a Disneyland full of ads” but for the SRs, St Pauli have already sold out.
They criticise the installation of 200 business seats and VIP boxes, one of which has been bought by Susis Showbar, a strip club from the neighbouring Reeperbahn. Women were pole-dancing during matches and stripping when St Pauli scored.”
The Guardian about The Social Romantics 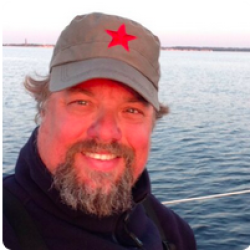